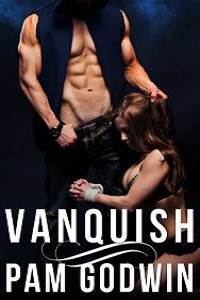 Pain. Dense, maddening bursts of pain splintered through Van Quiso's shoulder and reduced him to a pathetic mouth-breather on the kitchen floor. Heaviness settled over him, pooling down his arm and collapsing his chest. Each slogging beat of his heart drained more blood from his body, chilling his veins, soaking his t-shirt.

He should've known Liv Reed would be the death of him. If he could focus past the throbbing wound, maybe he'd hear a haunting serenade beneath her breath, beckoning him toward the cliff of oblivion with seduction dripping from her lips. He could only hope his descent into hell would be so enthralling.

He dragged his eyes heavenward and met the bleak despair wetting hers. Their gazes clung, motionless, as shock deadened the air between them. She'd shot him. Too damned late to take it back. He wanted to slam his fist into her beautiful face. Even more, he ached to kiss the path of tears streaking her scarred cheek.

The cold linoleum pressed against his back. He'd fucked her on this floor countless times, bent their joined bodies over the wobbly kitchen table, and slammed her against the fridge until her moans drowned out the whine of the old motor.

But their best moments had happened in the attic chamber, where her ass reddened under the fall of his whip as her lithe body hung from the ceiling, the sound-deadening walls absorbing her screams. For seven years, she'd been his to discipline, fuck, mentor, and keep.

Pulsating shadows framed his vision, closing in and threatening to take him from her permanently. Final judgment awaited him in death, but his punishment had already been inflicted. She no longer feared him. She was no longer his. The burn in his shoulder ignited. If he died, what would become of her?

His lungs clenched, not from injury, but from something more debilitating. He suffocated with the need to tangle a fist in her hair and never let go. She knew better than anyone the justice of his death, yet her full lips quivered. Lips that tasted like butter-soft caramel.

She knelt over him, shocks of brown hair tangling around her arms, the curve of her body taunting him. What he wouldn't give to feel her tight, reluctant cunt gripping his cock one more time. But she loved another man.

His ribs squeezed against the swell of rejection. She'd actually pulled the trigger. How could she think he was going to kill her? Didn't she know he'd die without her?

Dots blotted his vision. From the blood loss? Or was it the tremor of ice-cold fear passing through him? Hard to deny that he'd earned her distrust, kidnapping her when she was seventeen, taking her virginity without asking, and blackmailing her into delivering slaves for Mr. E.

Despite all that, every second at her side had nurtured Van's stupid-as-shit hope that she'd grow to love him. A hope that slipped through his grasp the night she abducted Joshua Carter against her will. She’d fallen in love with her newest slave, and that betrayal hurt worse than the lead buried in his shoulder.

But the blow that turned him against Mr. E's operation came six days ago. Van had sent her to meet with a slave buyer. There was a disagreement, and the buyer brutally raped her.

Renewed rage boiled in his gut. If he'd gone with her, he could've protected her. Sweat beaded on his lip. What was he thinking? He couldn't even protect her from himself.

He stared into the gorgeous, watery eyes of his first captive as her fingers caressed his jaw. He'd beaten and fucked her into submission and failed to stop Mr. E from killing her mother. Still she cried for him. His breath hitched. He loved her suffering in a way he couldn't rationally understand.

When he'd gone after her rapist, it hadn't been some chivalrous act of heroism. He'd fucking reveled in the dismemberment of limbs, the flaying of skin, and the gurgled screams of a man as atrocious as he himself. With the stain of his first kill dripping from his hands, he'd put his exit plan in motion. One that would free them from Mr. E's operation and bind them together. A family.

But her pretty boy was a menacing blockade to his plan. Joshua hovered behind her, his ridiculous linebacker brawn flexing to finish the job if the bullet failed. Despite the boy's apparent willingness to sacrifice his life for her, he couldn't protect her from their boss.

Was she still trying to wrap her mind around everything she'd just learned? Her face had blanched a chilling shade of white when he'd told her Mr. E was not only his father but also the police chief of Austin. And he hadn't disclosed the worst of it.

His pulse weakened, and his breathing thrashed. He needed to get the bullet out. If he survived, it would take days to recover. Days he and Liv didn't have.