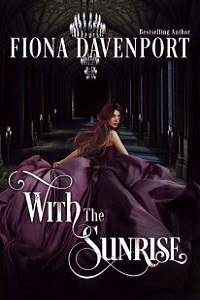 “I’m going to stop in that shop for a moment.” My friend, Silas, pointed at a small vintage emporium across the street from the tailor where we’d picked up our suits for his wedding ceremony. “I want to purchase a little gift for my Victoria to wear with her bridal gown.”

I glanced at my watch to see that it was nearing seven at night. “Best hurry. I imagine they’ll be closing any minute.” Living a mostly nocturnal life could be a pain in the ass sometimes. Humans always wanted to close up before the sun went down.

However, seeing as we were vampires, night life was definitely preferred, despite being daywalkers. Simply because we were immune to sunlight didn’t mean we enjoyed it. Our skin was pale, which made it exceptionally susceptible to burning. And our light eyes had better vision in the dark.

Plus, Silas, my two brothers, Kieran and Stephan, and I often spent our nights chasing and slaying nightwalkers. Those were the evil, stereotypical vampires that humans read about in their stories. They hunted the mates of our kind, killing off our consorts to decimate the population of daywalkers.

In the long run, it was easier to get up a little earlier in the evening to run errands and complete other tasks than to constantly pay people to open their doors to us late at night.

Silas bounded across the street, and I followed at a much more sedate pace. He’d recently found his consort, and as happy as I was for him, his constant cheer and energy were a little irritating. The sweet way he talked about his consort gave me a fucking toothache. I wondered if I would act like such a pussy if I ever found my mate. But after four hundred years, I was beginning to accept that it would never happen.

By the time I reached the front door to the shop, Silas was already inside, talking animatedly with the man behind a long display case. I hung back, waiting for him to make his purchase so I could return home and get ready for the night ahead of me.

To my right was another glass enclosure that held ornate cuff links, and I found myself a little curious, so I wandered over to take a look. When I stepped up to the display, my eyes didn’t linger on the items in front of me. Instead, they immediately wandered to the left where a plethora of rings sat in a bed of white velvet.

Among them was a gold ring with a thin, delicate band and an oval amethyst—the deepest and most brilliant purple I’d ever seen—in a flat, diamond-shaped setting that held smaller diamonds all around the larger stone.

As I stared at it, something unexpected and completely foreign stirred in my body. It wasn’t as though I had no sensation or feeling in my body, but without a consort, everything was muted, and we felt no attraction or arousal. Not until I touched her would I ever feel those things, and it wasn’t what I was experiencing. It was almost as though my body was attempting to wake from a deep sleep, and there was a strange warmth in my chest, which was a little disturbing.

Still, I was curious. A young man, the owner’s grandson from the looks of it, was standing behind another case, arranging whatever was inside. I called to him, and he smiled as he quickly made his way over to me.

I pointed at the ring. “I’d like to see that one. Can you tell me anything about it?”

He lifted the top pane of glass and reached in to retrieve the trinket. “I can tell you that it's from the 1880s, but we don’t have any history on it. My grandfather picked it up at an estate sale a few months ago. The man was rumored to have been a crook, so this could have come from anywhere.”

I held out my hand, palm up, and he dropped the ring onto it. The minute it touched my skin, the feelings I’d been experiencing intensified. My skin felt hot, but not like I’d been burned from fire; it was something different. Since I’d never felt it before, I couldn’t put a name to it.

Looking closely at it, I turned it over a few times, though I had no idea what I was expecting to find. Silas tapped me on the shoulder then, drawing me out of my stupor.

I nodded and held the ring out to the salesman. When his fingers touched the top, I found myself snatching it back with a growl. What the fuck was happening to me?

“Sorry,” I mumbled. I tried to hand it over, but my arm just wouldn’t move. Rather than stand there looking like I belonged in a strait jacket, I grunted, “I’ll take it.”