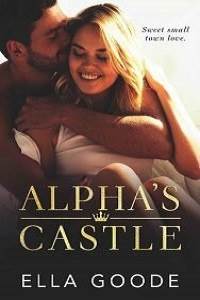 I punch the last period and hit enter. A second later, the printer behind me starts chugging. I spin around in my chair to watch the paper feed out and drop into the tray. It’s the day of digital tech and emails and scans, but I’ve always preferred paper. I read paper books, get my fingers dirty every morning with the daily newspaper, and keep printed reports. My brain just works better that way. I swipe up the report, scan it and then tuck it into the manila folder for Bev to file away later.

A peak outside my office window reveals that the sun’s almost down. It’s time to get out of here and get some food.

“Bev, you wrapping it up?” I call to my dispatcher slash secretary as I unclip the badge from the front of my shirt.

“Yeah, but you aren’t.” She appears in my doorway with a paper in her hand making we wonder if something is going on out at King’s place. I don’t feel like making a drive out there tonight. Things have been quiet out there. It’s how he and I both like it. “Better stick the badge back on. Connie over at the Pie Tin says there’s an intruder at Aunt Mae’s place and wants you to come over and check it out.” Well, shit. I’d rather go out to King’s than deal with this.

“Connie says that every three days, and there isn’t anything there but a few rats feasting on a crow’s carcass,” says the night deputy, Ren Haskins.

“The noise has been going on for at least twenty minutes and it’s not a rat even if Ren says so. Remind him I wiped his bare bottom and that he better honor his elders.”

My deputy’s cheeks turn red. Flustered, he adjusts his hat. “She’s a whole five years older than me. Honor his elders, my ass.”

“I’ll go check it out,” I say. If we send Ren over, he’ll end up in an argument with Connie and we’re barely living down the last tiff the two had. We’re still finding traces of flour in between files and under mats from when Connie stormed in and threw a whole bag of flour at Ren’s head after he accused her of being a hypochondriac. She is one, but we’re all supposed to pretend she isn’t. How Ren has made it to the big age of twenty-four and not been killed by his sister is a mystery to all of us.

“You better zip up tight,” Ren advises. “She and Mason broke up two nights ago and she’s looking for someone to make him jealous.”

“I’ll keep that in mind.” Connie’s been hitting on me for years. I think it’s almost a reflex at this point.

“If you would get married, you wouldn’t have these problems,” Bev declares. “I have a friend who—“

“That’s all right, Bev.” I cut her off before she can start on how her first cousin once removed knows a woman whose aunt knows a girl who is sisters with someone who is just right for me. I shrug into my jacket and check my weapon. There’s probably nothing going on in Mae’s empty lot. Our little town of ten thousand doesn’t get much action, which is just how I like it. I spent four years in a crime-riddled city, breaking up fights, tracking down murderers, arresting drug dealers. The rate of burnout in the force is high because of all the shit we have to deal with—both inside the station and out. When I got the opportunity to come home and be chief of my own squad, I couldn’t pack fast enough. It’s a quiet town with nice people. Some folks need the bright lights and the constant flow of traffic. I’m good with a book, a fire and Misty on my lap. Things are uncomplicated that way.

“Tell my sister to run me some dinner,” Ren tells me as I’m about to leave.

“I’d rather keep my balls attached to my body,” I answer.

“That’s about right.” I let the door fall shut behind me. A passing truck honks its horn and Andy Patterson leans half his body out to hail me. “Nice night out, ain’t it, Chief!”

“Yessir!” I receive a salute before the old farmer speeds off.

Connie’s place is just off of Main Street. The outside lights are dimmed because Connie closes at five sharp, but the lights are on upstairs. She’s probably getting Ren’s dinner ready. The woman’s been taking care of her little brother since they were kids and it’s not changing now.

There aren’t any lights on at Mae’s place, which makes sense since the electricity got shut off last month. Kathy at the utility plant called me and said it should be done for safety reasons and I agreed. If Mae’s heir doesn’t show up to claim this place, we’ll probably have to sell it at auction. It’s not good to have an abandoned lot in the middle of town.