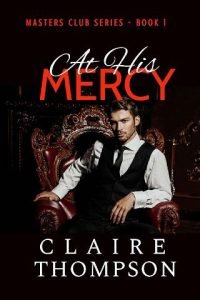 Cameron Lord watched from a distance, his eyes riveted to the scene. With each flick of the whip against her ass, his cock twitched with appreciation. From his vantage point, he could see only her back, and even that was partially obscured by the crowd that had gathered around the scene station, and the hulking man in leather wielding the whip.

He would have liked to see her face. Was it twisted in agony? Slack with submissive bliss? Her thick, copper-colored hair was piled loosely on her head, tendrils escaping at the nape of her long, slender neck. He pushed his way closer, seeking a better view.

She was naked, save for a pair of thong panties, her wrists and ankles cuffed against a cheap, portable St. Andrew’s cross. Her back was streaked with dark pink welts, the kind that stung like hell when delivered, but would probably have faded away by morning. Her ass was cherry red, some bruising evident where the rounded globes met her thighs.

He edged closer to get a better look at the woman cuffed to the cross. He admired the long, lean curves of her youthful body. She flinched as the whip’s tip made contact with her flesh, but otherwise remained still and quiet. The man delivering the whipping was mechanical in his movements, seemingly devoid of passion.

The onlookers watched the unfolding scene with leering silence, several with their mouths hanging open. One guy actually had his hand down his pants.

Mildly disgusted, Cameron started to turn away, but a cry from the girl arrested his attention. Shouldering his way to the front of the motley assortment of gawkers, he saw the long red welt curling around her hip bone.

“That was your fault,” the man snapped. “I can’t aim properly when you’re jerking around.”

Cameron nearly said something, but held his tongue. What did he expect from a public club? The players here were rank amateurs.

“That was your fault, not mine. You moved,” the guy snapped. “I’m the boss, and it’s over when I say it’s over, and not a second before that, sub girl. I want to mark those perky tits of yours. Then, we’ll go to one of the private rooms where you’ll get on your knees and thank me properly.” He barked an ugly laugh.

This time the woman spoke loud enough for Cameron to hear. “Are you deaf or just stupid? I used my safeword. Let me down.”

A husky female voice from the crowd called out, “She used her safeword, asshole. End of story.”

The would-be Dom glanced back, glaring as his eyes moved over the people gathered there. Turning back to the girl, he snarled loudly, “Fucking prick tease. You said you could handle anything. Obviously not.”

Cameron had had enough. The guy was being a total jerk. He made a move forward, but before he could get close enough to intervene, the woman who had called out stepped onto the scene mat. She was maybe in her fifties, heavyset but still quite attractive in a black leather minidress that hugged her ample curves. “The girl said no, bub.” She put her hand on the man’s shoulder. “No means no, and safeword means end of scene. Capiche?”

The man shook himself away from the older woman’s touch. He glared around at the crowd, but found no sympathy there. “Fuck this,” he growled. Bending down, he grabbed his gear bag, stuffed his whip into it, and stalked away.

What a flaming asshole. Cameron had the urge to follow the guy, tap his shoulder, and when he turned around, punch him in the jaw.

But he stayed where he was, watching as the woman crouched to release the bound girl’s ankles and then stood, reaching up to unclip her wrist cuffs.

The naked girl lowered her arms and turned slowly from the cross. She was lovely, with round, high breasts, a long, slender torso and gently flaring hips. Cameron’s cock twitched in appreciation at the lovely sight.

His gaze moved up to her face. A jolt of recognition shot through him.

“Holy shit,” he mouthed silently. His brain was having a hard time connecting the dots as his two worlds collided.

Her hair had come out of its makeshift bun and now fell in a coppery tumble of loose curls to her shoulders. Her face was heart-shaped, her large green eyes bright. Her mouth was lush, the lips full and red, like a plump piece of fruit just waiting to be bitten. Why had he never noticed before how ravishingly beautiful this young woman was?