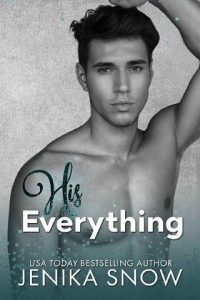 A soft sound woke Lauren, and she slowly opened her eyes. Her room was dark, and she was on her back, staring right at the ceiling. Maybe she’d been dreaming? Closing her eyes again and turning onto her side, she started to feel herself drift back to sleep when she heard tapping on her window.

Her heart started pounding hard in her chest, and she opened her eyes, not moving, but staring at her window. The curtains that covered the glass were sheer, and she saw a big dark figure through them. The moon must have been full because it was bright enough to make out the shape.

“Poppy, it’s me.” The voice on the other side of the window was soft but very deep, and she recognized it right away, recognized Ace calling her by the nickname he’d given her so long ago. He was the only one that called her Poppy, after her favorite flower.

Pushing the blankets off her legs, she stood and walked over to the window. Grabbing the edge of the curtains she pulled them aside and saw Ace standing there, his eye swollen almost all the way shut, on his cheek smeared blood, which had clearly come from his nose, and a split bottom lip.

She gasped, quickly opened the window, and helped him inside. Her mom and dad were just down the hall, and although they thought of Ace as part of the family for the last couple of years, and knew he had a bad family life, having a boy in her room in the middle of the night would still piss them off.

“God, Ace.” She pulled him in for a hug, and even though he was only thirteen he was already over six feet tall. He was a big guy for his age, and that made him stand out in school; being an outcast not only because he kept to himself, but also because he was so much bigger than anyone else. Right now he seemed so weak and vulnerable, so breakable. They both slid to the ground, with her arms still around him, and the wind lightly blowing in her room from the still opened window.

“I didn’t know where else to go,” he said in an almost detached voice.

She grabbed the side of his face that looked unharmed, turned his head toward her, and looked at his wounds. “You know you’re always welcome here. This is a safe place, Ace.”

“Even fighting back doesn’t help when he’s drunker than piss,” Ace said, his eye not swollen shut still red-rimmed from his emotions. His dark hair was a mess around his head, and she ran a finger along the strands that fell over his forehead.

“Something needs to be done,” she said softly. “Let me call the police, Ace. He can’t do this to you—”

He shook his head while she still spoke, placed his hand over hers that was on her face and stared into her eyes. “That won’t help, Lauren.” He said her real name, and that told her he was being serious, determined for her to understand. He applied pressure to her hand. “You know my dad has a lot of connections, knows people that can get him out of this shit, and besides, the last time the cops were called it was a lot worse.”

Yeah, she knew that his father, despite being a drunken asshole, had friends in the police department, as well as legal buddies that had apparently helped him out of all kinds of situations. How anyone could live with themselves and help a child abuser infuriated Lauren. But Ace had told her that his father could make anyone feel sympathy for him, playing on the whole ‘his wife was gone, he had to do everything alone, and that he was dealing with an unruly teenager’.

“I hate seeing you like this.” She felt tears well in her eyes. There had been several times she’d been tempted to call the police, had even picked up the phone to do it so many times she’d lost track. But then she thought about what Ace had told her about the last time the police had come to his house, or even when child services had been called. It had been pure hell for Ace after it was all said and done, and she was at war with herself on what to do.

But what Ace hadn’t known was she’d gone to the police once, asked them anonymously what “her friend” should do, and unless there was a record or physical signs of abuse, not much could be done. Especially when Ace had a record at school of fighting, which cemented his father’s story of Ace being unruly.

He lifted a finger and wiped her tears away.