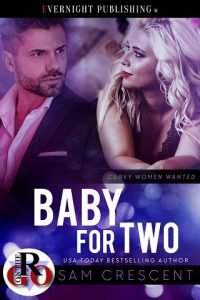 “This is crazy. Insane.” Meredith Shaw sat back and glanced around the café. Two hours ago, she’d sat behind a sperm bank, ready to go in and make herself an appointment. At thirty-five years old with no daddy prospects in sight, she was in a stable enough position to not need a man to help her get what she wanted. A baby. She wanted to be a mother so badly.

So far, she hasn’t been all that lucky in that department.

She’d never been the kind of person men wanted or fought to get their hands on. All of her life, she’d been considered boring, which was one of the many reasons she’d simply thrown herself into her work.

She brought her attention back to him. “You need to ask me that? We’ve known each other what? Two hours, and we’re writing up plans for a baby. You don’t know me and I don’t know you.”

“So do I.” He pointed at the papers on the table. “This makes perfect sense. You want to keep getting someone else’s sperm. It doesn’t just work the once, you know.” He held his hands out. “Yes, I know, some people just get lucky, but what if we’re not those people?”

He made a damn good argument. She didn’t want to have to deal with disappointment, not again.

“I need more coffee,” she said.

“When the baby comes, you can’t have any.”

She glared at him. “Right now, no baby is happening.” She climbed out of the booth. “Do you want one?”

“Yes, please, but don’t worry, when you’re pregnant, I’ll join you in not drinking at all.”

“Almost too nice.” He winked at her.

She rolled her eyes and made her way to the counter, ordering them both the same, paying, and carrying them back to the booth.

Sitting down, she took a sip, not minding the hot liquid that scolded her throat on the way down. She needed to do something, anything, right now, to take her mind off this crazy train.

“Okay, let’s break this down again.”

“Yes. This is important. You don’t just go out and make a baby without thinking of all the consequences.”

Jared snorted. “Do you live under a rock? It’s what a lot of people do.”

“Not everyone.” She ignored his eye roll. “We both want to have a baby. If we’re successful, we will share custody?”

“No, no, I really do like my own space, and besides, it’ll be good for our baby to know we both live separate lives and well, we can make it work for them.” She smiled just thinking about it. She didn’t care, boy or girl. Just a healthy baby.

Wanting a child wasn’t some kind of reaction to a body clock ticking. No, this was a burning desire to finally be a mother. She’d always imagined herself being a wife, having a bunch of kids around while she made chocolate chip cookies. It would be fabulous, but it hadn’t been in the cards for her.

Rather than cry about it, though, she was positive and happy.

It was all she could be when this was her only option. The last boyfriend she had was over four years ago, and that hadn’t lasted long. He’d broken her heart, saying some cruel things in the process.

“This all sounds good to me, but you know we’re not going to know everything until our baby comes.”

Every time he said our baby, she got a little fluttering in her stomach.

“Before we move onto the … er … actual way of conceiving, why do you need this?”

“I know, but, don’t you have, like, a slew of women waiting for you?” This man was hot on a big scale. The suit, rather than making him look stuffy, made him look calm, collected, and put-together. There was no doubt about it, he was ripped. She didn’t know any personal details about him, other than his age and name.

He didn’t know anything about her either.

“Ah, you think I can have any woman?”

“Well, you do look … amazing.” Now her face was on fire. This couldn’t be any more embarrassing, or maybe it could. She honestly didn’t know anymore. For all she knew, this could be mortifying.

“It’s good to know the future mother of my child thinks I look okay.”

Now he was lying. “Can we stay on track please?” She’d been called a lot of things in her life, but hot wasn’t one of them. “I think we need to talk about conception.”

This time, she frowned. “What?”