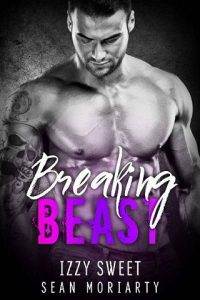 Crouched behind a parked car, watching my own home in the dark, I feel like a criminal. The lights in my house are on. I can see through the windows my stepbrother, Travis, pacing around, talking into his cellphone as he gets ready to leave for the night.

The street is quiet, the crickets are chirping, and there’s a full moon out tonight.

How did this happen? How did I get here? I wonder as I huddle deeper into my hoodie, wrapping my arms tightly around my body.

The muscles in my back and thighs are beginning to ache. I shift my position, trying to relieve some of the tension, but the pavement is hard and unforgiving.

How did I let him force me out of my own home? I sigh and wonder where the hell I’m going to sleep tonight.

Travis didn’t kick me out. No, if anything, he’s anxiously waiting for me to return...

So he can have his way with me.

I can’t go home now and expect to be safe. I can’t sleep in my own bed or feel comfortable in the room I’ve grown up in—the room I’ve slept in my entire life.

I have no one to protect me. No one to keep him off me.

Or kick his ass.

My mother passed away from ovarian cancer two years ago. My stepfather pretty much checked out on life when she passed.

I’m completely on my own now. It’s survive or die.

Come on, come on. What’s the holdup?

Travis is usually gone by now.

My shift at Burger Bells ended an hour ago. I think I’ve been out here, crouching behind this rust bucket, for thirty minutes or more.

My damn feet are starting to fall asleep.

Travis pauses in front of the living room window and yanks the curtain to the side. I jerk backwards and press myself up against the car, hoping he didn’t see me.

Even from here, across the street, I can hear him angrily cursing. He’s probably just as pissed as I am that his ride is running late.

My heart pounds behind my ribs. I don’t know what the hell I’ll do if he does see me.

Off in the distance I hear the sound of an engine revving. A few moments later a car roars down the street.

“Quit your bitching and just get in the car,” one of his lowlife friends snaps out.

I peek around the tail end of the rust bucket and watch Travis climb into the passenger seat of a green tricked out Neon.

His door shuts, and just above the loud rock music I can hear him and his friends hooting and hollering about all the fun they’re going to have tonight.

The engine of the car revs loudly and then they take off, roaring down the street.

I lean back and slump against the car in relief. He’s gone, finally.

Still, I remain in my hiding spot for a couple more minutes, just in case.

When I’m sure the coast is clear, I climb to my feet. Brushing my legs and butt off, my knees ache with pain.

I stomp my feet a couple of times to get the blood flowing again then sling my backpack over my shoulder and cross the street.

Reaching the front door of my house, I check the knob and it turns easily. Asshole left it unlocked.

I walk inside and my nose is immediately assaulted by the stinging smell of cheap beer.

My stepfather, Herb, must be home and no doubt he’s drunk again.

I make a beeline for the living room, feeling the need to check in on him. I find him passed out in his faded recliner with an empty beer bottle dangling from his hand.

He didn’t even bother to change out of his dirty work clothes. He works in construction so he often comes home with his jeans covered in dirt and his boots caked with mud.

I watch him for a couple of minutes just to make sure he’s breathing. His head is tipped back and his mouth is wide open but he’s not snoring.

It would be so easy to be angry at him for all of this. If he’d just stop drinking and pay attention to what’s going on, I know none of this would be happening.

I know if he truly knew what has been going on, I’d have his protection. In the past, he’s always been there for me, he’s always had my back.

He’s a decent man, but the death of my mother completely destroyed him.

He first started drinking in hiding when she was originally diagnosed. Sometimes I’d wake up in the middle of the night to hear him stumbling into a wall or crying loudly in the bathroom.