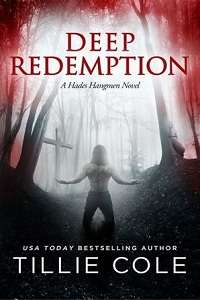 Hades’ soulless black eyes stared down at me. My hands were tucked into the pockets of my jeans as I studied the mural before me—a huge painting of Satan on the Hangmen MC’s clubhouse wall. His grinning face smirked at me as I waited for one of the brothers to come and get me. The brother’s name was Smiler. He was older than me, but not by much. I had met him at an ex-forces biker bar just outside of Austin.

My uncle’s plan had worked like a charm. Smiler and I had talked. I’d mentioned serving as a marine and I’d gained his favor. Now he was introducing me to the precious motorcycle club that he loved more than anything.

But it was all lies. I had never been a marine. I didn’t even know what one was until last year. It was just the perfect cover, a perfect way in.

As I waited for Smiler, I cast a look around the yard. My eyes flared at what I saw. Women, dressed with the sole intent of seduction, hung around the compound in small, fragmented groups. Some were brushing their sinful bodies against the men. All were intoxicated with alcohol and I didn’t know what else. The men were loud, raucous, savage. Most tossed back their drink of choice while groping the women in intimate, forbidden places.

My stomach lurched when I saw one of the men throw a woman wearing a tiny red garment against his chest and push her down to the ground to face his crotch. My face burned, flaming with rage, as he undid his zipper and pulled out his hardness for everyone to see. Gripping the back of her hair, he forced her lips open and made her take him in her mouth.

The woman didn’t resist . . . in fact, she moaned, as her friend dropped to the floor to join her. I was frozen on the spot as I watched the depraved, sickening act. My hands shook at the immoral lives these men and women lived.

This was a cesspool of sin. A place worthy of the devil they wore proudly on their patches.

“You like what you see?” My head snapped back toward the clubhouse door. Smiler was standing in the doorway, staring at me with amusement in his eyes.

I forced myself to play the role I had spent the past year preparing for. “It’s different, that’s for sure.”

“You ain’t seen nothin’ yet,” Smiler said dryly and waved me through the door.

I entered what looked like a bar. I could barely take everything in. Loud rock music filled every inch of the smoky air. Men of all ages—clearly members of the Hangmen—were littered around the room. Some were with women, conducting salacious acts like the one I’d seen outside. Some were sitting around tables drinking, some were shooting pool.

I hadn’t realized I’d stopped, glaring at the vile, impure scene before me, until Smiler waved his hand in front of my face. I blinked, focusing back on him, and ran my hand down my face. “What?” I asked, unsure if I’d missed anything he’d said.

Smiler shook his head. “Don’t worry, man. You get used to it in time.”

I flicked my chin and smiled at him. As he led me toward a door at the back of the room, I schooled my features and focused on keeping my cool. A loud whistle came from behind me. I looked around and saw a naked woman dancing on the bar—a temptress. My top lip turned up in disgust as she shook her hips. A giant, redheaded man walked up behind her, gripping onto her thighs. “Crouch down, sugar-tits! I want a taste of that drippin’ sweet cunt!”

I stood rooted in place as she did as he said. The man leaned forward and buried his head between her thighs. The men around him hollered and cheered.

All I felt was disgust.

The sound of Smiler knocking on a door broke through my thoughts.

Someone called for him to enter, and he pointed forward. I followed him, knowing that this moment was it. In that room was the man who would decide if I would be taken on as the newest Hangmen prospect. The man that ran this sinful club . . . the man I had to impress, whose trust I had to earn.

The infamous president of the Hangmen MC.

My heart beat like a drum. “Rider!” Smiler called. “Get in here!”