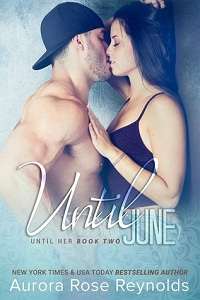 Looking at my reflection in the mirror across from me, I cringe. My hair is a disaster, there are bags under my eyes¸ and the nightgown I have on isn’t even one of the cute ones I normally wear. It’s the one my sister December got me as a joke, but I wear it occasionally, because it’s comfortable, even if it was made for a woman three times my age. Resting my elbows on the desk in front of me, I run my fingers through my hair, pulling the strands back away from my face.

“I hate men,” I whisper into the empty interrogation room, where I was told to wait over an hour ago after the police kicked in my door and dragged me from my bed. Lifting my gaze, I look at myself in the mirror again and vow that whenever I get out of the mess my ex-boyfriend has gotten me into, I’m going to learn how to be a lesbian, even if I’m not sure that’s actually possible.

“June Mayson.” I glance over my shoulder at the now open door behind me, and my eyes meet those of a man who reminds me of my dad. He looks to be in his mid-forties and is one of those men time has been kind to. He’s built with dark hair that’s cut short and parted on the side. His eyes are a blue that stands out against his dark lashes and tan skin. “I’m Officer Mitchell and this is Officer Plymouth.” He nods behind him and is followed in by a man who must be playing the roll of “Bad Cop,” judging by the frown on his face and the look he gives me when our eyes meet. Time hasn’t been as kind to him. He looks like he has enjoyed one too many beers. His middle is round, and his skin doesn’t look healthy, in fact it looks yellowish.

Nodding, I cross my arms over my chest and run my hands down the bare skin of my biceps that’s chilled from the cool air coming from the vent above me.

“Would you like something to drink?” Officer Mitchell asks as he walks fully into the room.

“Hot chocolate?” he offers, and I feel tears burn the back of my eyes. Since I was little, whenever I was having a bad day, my dad would offer me hot chocolate. His hot chocolate has magical powers that always make everything seem okay, but I doubt police station hot chocolate would have the same effect.

“No, thanks. I’d just like to know why I’m here,” I tell him as he takes a seat in the metal chair across from me and places a thick folder on the table between us.

“We may be here awhile, Miss Mayson, so I’d like you to be comfortable,” he says gently. I look at Officer Plymouth, who is leaning against the wall, then back to him.

“I don’t mean to be rude, Mr. Mitchell, but I’d really like to get to the point. I have class in a few hours and I really need to make it on time.”

Closing my eyes, I open them slowly and ask, “Can I get a sweater?”

Surprisingly, Officer Plymouth slips off his suit jacket and walks it over to me, placing it around my shoulders.

“Thank you,” I whisper up at him, and his eyes soften around the edges. Pulling my eyes from him, my gaze goes back toward Officer Mitchell.

“How long have you known Lane Diago?” Officer Mitchell asks, and I sit up a little taller.

“I don’t know anyone by that name,” I tell him, and he opens the file folder, fanning out a few pictures of my ex-boyfriend Aaron and me directly in front of me. Each of them were taken while we were a couple, showing we had been followed more than a few times. Him coming to my apartment…him kissing me outside my car…at the store, walking hand-in-hand down the aisles…at the movies…out to dinner…both of us doing normal couple things.

“That what he told you his name was?” he asks, and I nod looking up at him.

“I’ve known him for about a year,” I whisper, dropping my eyes to the pictures again, realizing I actually didn’t know him, since his name isn’t even Aaron.

“How long have you two been dating?” he inquires, and my eyes drop to the pictures once more.

“We dated for about four months. I broke up with him a month ago,” I tell him truthfully as a feeling of sadness hits me unexpectedly. I wasn’t in love with Aaron—or Lane. Not even close. But I cared about him and believed he cared about me as well. That was, until he sent me a text to meet him at his house. When I got there, one of his roommates let me in, and I found him up in his room with Susie Detrei’s mouth around his cock, proving I was wrong about him.