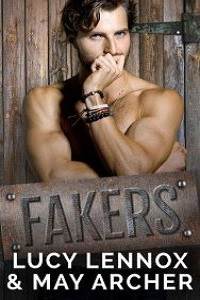 Have you ever seen a train wreck happen in real time?

Yeah, no, me neither.

But then I watched Kale Storms, heir apparent to Storms Marketing, LLC, lean across the glass table in our Midtown Manhattan conference room and fucking purr at our potential client, General Beauregard T. Partridge—the octogenarian founder and CEO of Partridge Pit BBQ, with its ninety-seven dining locations across the South and a brand-new line of specialty sauces—like it was leather night at the club and the General had been a naughty boy.

“So I think you’ll find that what we’ve designed for you here, Mr. Partridge, is something really sleek but also raw. Something fresh but also classic. Something sexy that also encapsulates the inherent impotence and mortality in all of us. Something that’s going to elevate your barbecue sauce from a humble condiment people slap on grilled flesh into something better.” Kale’s lips pouted and his eyes smoldered. “I think you know what I mean by that, Mr. Partridge. I think you’re ready for the sexy. And I think you want it.”

As I sat in my chair, momentarily paralyzed, I suddenly had the distinct impression I was watching that train wreck from inside the fucking train.

Putting Kale in the lead on this project had been a shit idea from the get-go, and I’d told Pamela so. “He’s twenty-three,” I’d reminded her. “Enthusiastic and full of potential but green. You know? And Storms Marketing has a reputation to uphold.”

This was Brooks Johnson speak for “Holy fucking shitballs, Pamela! What were you thinking, giving this ginormous opportunity to your idiot nephew, who has approximately the same IQ as the leafy green he was named after? And furthermore, how could you do this without talking to me, the guy who’s spent the last five years as your right-hand man, helping you build the solid reputation Kale’s about to toss in a dumpster and set on fire?”

But Pamela had brushed an imaginary fleck of lint from her fitted blouse and smiled her Botox smile. “We all have to start somewhere, Brooks, darling. You were an absolute prodigy at twenty-three, remember? Besides, Kale has you for a mentor, so I’m confident nothing will go wrong.”

Which, I happened to know, was Pam Storms speak for “Yes, I know he’s a total fuckup, but I gave you a chance once upon a time, Brooks, so you owe me. You’d better make damn sure nothing goes wrong.”

I’d suggested he loop in Paul Siegel, the senior marketing communications director and my second-in-command. Kale had informed me he’d “hired his own team, Brooks. Fresh blood. People who really know advertising”—which was infuriating on many levels, but primarily the financial one, since I happened to know Storms Marketing didn’t have anywhere near the kind of budget “fresh blood” cost.

I’d threatened to go to his aunt. He’d ignored me.

I’d been ready to hack Kale’s laptop to get the info, when Paul reminded me that I had no clue how to do that. “Besides,” he’d said reasonably, pushing his glasses up his nose, “how bad could his presentation really be, Brooks?”

Watching Beauregard Partridge’s eyes widen and his cheeks flush pink beneath his white-white hair as Kale reminded him of his impotence and mortality, I could confidently say it was pretty fucking bad.

I lifted one eyebrow at Paul across the table. He winced and rubbed his forehead below his receding hairline, and I knew we were thinking the same thing: How the hell is Brooks going to fix this?

But I would. It was what I did. I smiled and I was polite, I never argued or let anyone down, I tap-danced like a fucking champion, and I made shit happen.

I cleared my throat and moved to hijack the meeting when Kale turned off the lights and hit Play on the ultramodern wall projector. The room was suddenly filled with a terrible screeching of birds, and glowing, stylized letters on the screen spelled out Plate of Bones… Flavor is Coming.

I slumped back in my seat, and the next three minutes passed by like a sort of black-and-white Stanley Kubrick fever dream. I had vague impressions of a Throne of Iron made out of forks and knives, of a tablecloth saying House Partridge with a stylized chicken logo in the center, and of a psychopathic-looking guy slurping reddish sauce—which did not look like sauce—off his fingers.