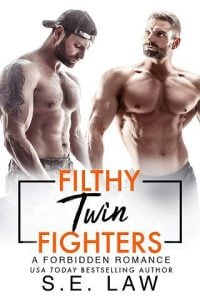 I blow out a breath with exasperation because I can’t believe this is happening to me. Right now, I’m getting ready to stalk MMA fighters Talon and Torment Creighton as they head into the gym for their daily workout. Of course, they can hardly miss me seeing that I resemble an enormous green blob in my lime green sports bra and matching biker shorts, but what can I do? I don’t exercise, so I had to borrow this outfit from my roomie. Unfortunately, beggars can’t be choosers.

Even more, I had to take this assignment because my boss is angry with me. She’s irritated that as a celebrity photographer, I missed getting some cute candids of a new celebrity baby. Instead, Skipper from CelebBeat got the scoop, catching the Bachelor Nation couple right when they were leaving a coffee shop with the cooing infant in their arms. I guess the kid decided to vomit all over his dad while I was still pulling up in my car, which made for a lot of laughs. But my boss wasn’t amused because the candids were worth a lot, and unfortunately, I missed the money shot. Sure, I got some cleaning-up photos afterwards, but they weren’t worth nearly as much as the ones where the baby is literally projectile vomiting onto his dad’s perfectly coiffed hair.

So now, I’m in my car in the parking lot of McGee’s gym, wearing a silly spandex outfit while waiting for Talon and Torment Creighton to show up. The two of them happen to be local to my New Jersey town, so my boss thought I was perfect for the story. Yeah, right.

In my opinion, I’d be much better suited working in New York City, maybe scoping out Broadway shows or maybe even Radio City Music Hall for celebrities. I heard a few big names are opening shows in the upcoming months, and I could make up for my blunder by getting some candids there.

But instead, I’m itching at the tag of this damned sports bra in the parking lot of a gym. Blegh. Well, at least Talon and Torment are hot. I glance at the picture I have on my phone and my heart pitter-patters. The MMA fighters are identical twins, although there are subtle difference between the brothers. Talon has a small scar above his eye, likely from an unsanctioned fight if I had to guess, and Torment’s smile is a little crooked. He’s probably been knocked around inside the ring a lot, given their years of experience.

But if anything, these imperfections make the guys even hotter because they lend the twins a tough, rugged aura. Don’t get me wrong, I like male models just as much as anyone else, but sometimes those guys are too perfect. They’re Ken dolls, and it can feel a little too plasticky at times.

But there’s nothing Ken doll-ish about Talon and Torment. These men are enormous and muscular, with black hair and piercing blue eyes. Their physiques look to be carved of wood, and just one of their thighs seems to be the same circumference as my entire torso. I’m not a small girl either, so that’s saying something. But what am I thinking? I have to force the naughty thought away. I’m on a job, for crying out loud, and I’m already in hot water with management. I need to focus.

At that moment, a car pulls into the spot next to me and I glance up idly. OMG, it’s Talon! Who would have guessed that he drives a Audi sedan? I thought MMA fighters drove enormous monster trucks, but it seems that he’s more low-key. Of course, the man’s absolutely gorgeous. His dark hair is cropped close to his head, and his eyes are hard and determined. Talon wears a t-shirt, and those bulging biceps practically rip through the cotton.

Yum. I wipe my mouth to make sure I’m not drooling. I photograph celebrities for a living, which means I’m no stranger to attractive people. Hell, I’m practically used to it by now, so they don’t usually affect me this way. But there’s something about the athlete that’s magnetic, and I have to remind myself for the umpteenth time that this is business. This is no time to moon around, daydreaming about my handsome target.

I watch casually as Talon slings a gym bag over one shoulder before striding across the parking lot towards the entrance of McGee’s. The door swings shut behind him, and then I spring into action. I scramble out of my car with my iPhone in hand. There’s no need for heavy cameras or tons of photography equipment anymore because you’d be surprised how good phone cameras are these days. Honestly, Apple is up there with the best of them, and the tech company has revolutionized my job.