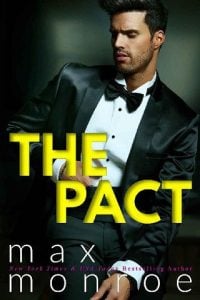 To the word that starts with an F and ends with U-C-K: Keep up the good fucking work.

The four Winslow brothers in Vegas. What could go wrong?

Ha. Pretty much every-fucking-thing can go wrong when all three of my brothers decided a boozy brunch to start the day was a grand idea.

Although, so far, their only drunken sins revolve around stumbling steps and being a little too loud for the early afternoon casino crowd, but my track record of knowing them for my entire life predicts this day to be one hell of a chaotic ride.

Says the bastard who always chooses to be the responsible, sober brother of the group.

“What time is it?” Ty asks, but he quickly answers his own question when he glances at the time on his phone. “Holy shiz, it’s only noon?”

Jude snorts from behind a blindfold that’s tied around his face. “My dudes. I feel pretty fuggin’ drunk for noon. How’d that happen?”

I almost laugh out loud. How’d that happen? Most likely, the bottomless margaritas the three fools drank at brunch is the root of the cause. Not to mention the round of tequila shots Ty ordered…three fucking times.

“Took the words right outta my mouth, bro,” Ty agrees and locks arms with Jude in a sloppy attempt to lead Mr. Blindfold through the casino.

These clowns’ need for a chaperone is so real it’s nearly violent.

Unfortunately, I am that man, and there’s only one person to blame—my brother Jude. The very bastard who decided to fall in fucking love, and late next month, he’ll say those two infamous words—ones that will sure as shit never leave my lips—and marry his fiancée, Sophie.

“Alls I gotta know,” Jude slurs, “is where we goin’ and when can I take this blindfold off?”

Is he getting drunker by the second? Fuck.

My eldest brother—and currently least drunk brother—Remy lets out a deep, heavy sigh that perfectly showcases how I feel. “Jude, you put the blindfold on.”

“What?” Jude questions, glancing from side to side, even though he can’t see shit. “No, I didn’t.”

“Actually, yeah, man, you did,” Remy states, annoyance more than apparent in his voice.

“I blindfolded me?” Jude scoffs. “That doesn’t make any-fucking-sense, bro.”

Frankly, I don’t have a clue why Jude insists on wearing that blindfold. What was meant as a one-time use when we surprised him with a trip to Vegas to celebrate his upcoming nuptials has turned into him putting the damn thing on in the name of “staying true” to his fiancée, Sophie like it’s some kind of chastity belt for his face. It’s beyond me how walking through the Wynn’s casino could pose any risk, but I’ve never pretended to understand my youngest brother’s mind.

In quite the turn of events, he went from a steady stream of women to what some would call “whipped,” otherwise known as completely and undeniably in love with his bride-to-be. I might not be the type of guy who buys into relationships and marriage and shit, but I can’t deny my baby brother is one-hundred-percent committed to Sophie.

So much so that he proposed four times before she said yes.

Four fucking proposals. If that doesn’t prove commitment, then punch me in the dick and call me the craziest Winslow brother.

Jude just laughs off Rem’s words, still leaving that stupid blindfold on, and mumbles something that apparently only Ty can hear.

“Puh-lease,” Ty comments through a sarcastic chuckle from behind me and stumbles arm in arm with Jude. “Remy probably spends most of his time picturing himself makin’ women look like toaster strudels.”

Jude cackles, and Remy turns around and punches Ty in the shoulder.

“Ow,” Ty howls obnoxiously. “What was that for?”

“For saying shit about me I don’t understand and probably don’t want to know either.”

My eyebrows lift, and a tiny smirk curves the corner of my lips. I know exactly what Ty’s talking about—though I wish I fucking didn’t—and he better write a personal letter to God, thanking him for Remy’s unexpected innocence, along with a request to forgive him for all his past and future sins. I guarantee if Remy knew what Ty was really talking about, I’d be making an unscheduled trip to the hospital. I don’t know what it is about Ty and alcohol, but mix the two together, and you get one of the most inappropriate men on the planet. It’s almost like a disease.

Currently, we are on day three of my youngest brother’s bachelor party extravaganza, and leading up to this day, I’ve endured over forty-eight hours of drunken debauchery, chaotic-as-hell nightclubs, and overly friendly strippers.

Don’t get me wrong, I’m more than happy to celebrate Jude; I just wish I didn’t have to be surrounded by the obnoxious Vegas party scene in order to do it.

Personally, I prefer quiet surroundings. Relaxed vibes. Sober people. And while I’m probably in the minority when it comes to most men, going to strip clubs has never been my thing. Of course, I can appreciate the beauty that is the female form. I just prefer to enjoy it when it’s a consensual situation devoid of money and tips and fucking lap dances to songs that helped make Magic Mike a box office hit.