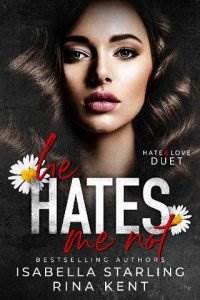 They Don’t Want What We Want - Asking Alexandria

Killer In The Mirror - Set It Off

Mindreader - A Day To Remember

You And I - Barns Courtney

Straight to My Head - You Me At Six

You can find the playlist on Spotify.

The chase is thrilling.

The decimation of the human mind, turning them into creatures of survival just to repeat it all over again isn’t only euphoric but also a turn on.

It’s a play of cat and mouse, or rather of predator and prey. People don’t realize they’re done for even when a predator is on their tail.

The adrenaline keeps them high and mighty; it tells them things that will never happen like maybe they’ll survive, maybe the nightmare will be over.

The adrenaline is a false sense of hope, one last hurrah before everything crashes down.

Hope is brutal, that way.

Hope is one of the reasons why the human mind can take so much torture in the span of hours or days.

Twirling the remote in my fingers, I stalk up to where Petal has disappeared behind the trees. If she wasn’t so clueless about her sensual world, she would’ve realized she left footprints behind in the black soil. Her tiny feet are etched in the ground like tattletales and I easily follow them. Tracking has always been one of my fun activities. Humans leave a lot of trails behind, and it’s usually the reason for their doom.

I’ve learned early on to never be blindsided, even by my own self.

It was the only way to survive.

The sky has turned dark red and soon, the night will take claim in the calm Sicilian countryside.

This was my family’s house in Italy. There’s a winery in the distance — it’s a vast field of grapes for the best wine produced not only in Italy, but in the whole of Europe.

Small bursts of memories started coming back to me after the chat I had with Enzo Morelli on the way here. My father, Francesco Vitallio, was slowly steering clear from the shady mafia activity and decided to settle back in Sicily for good.

He was wrapping up the family business in the States. My mother was singing joyfully, reminding me that we’ll go back to our home and lands. My nonna was telling me stories about my late nonno and how they loved the land, the air, the people.

Those were my most joyful memories.

Until Costas wiped them from the face of the earth.

Along with my entire family, my mama, my nonna, my baby sister. They’re all gone, and my form of revenge? Working for their killer.

I briefly close my eyes at the onslaught of emotions and fragments of memories.

Lucio and Paolo will pay in blood. Every last Costa will — starting with my little Petal who thinks she can escape me.

I hit the button on the remote, shocking her by the collar around her neck. A slight yelp comes from my right before it’s quickly muffled.

I smirk, imagining her wrapping her tiny hands around her mouth to hide her presence. What she doesn’t know is that a slight sound is all I need to track her down.

She’s naked, barefoot, in an unfamiliar place, with an electric collar around her throat. She’s at her most vulnerable state, and if she thinks she’ll escape me, then maybe my little Petal doesn’t know me so well after all.

“Pet…” I drawl, making her aware of my position. “Are you running? Hiding?”

There’s a small rustle. She was probably lurking behind a tree but after hearing my voice, she ran for it again.

My poor little Petal doesn’t know that not only her fate, but her entire life was sealed.

Joseph or Georgina — or whatever the fuck her name is — is my first step in my revenge against the Costa clan.

I’ll extract every death out of her flesh and then theirs.

Only, that’s not the reason behind my rock-hard cock — it’s the fact that she’s not only mine but she’s also at my complete mercy.

She’s mine to ruin, own, and fuck senseless without the outside world’s interference.

If this isn’t her wildest fantasy coming true, I don’t know what is.

Is it more than what she signed up for? Yes. Do I fucking care? No.

We played house in her apartment, so it’s time to play fucking house under my turf.

“You better run, Pet. If I catch you, it’s game over.” My voice echoes in the eerie silence of the forest surrounding the winery and the olive trees field in the opposite direction.

My nonno had this forest as a form of camouflage against the outside world. It was made to shield our extended families, the farmers who worked for us, the people who had our protection.