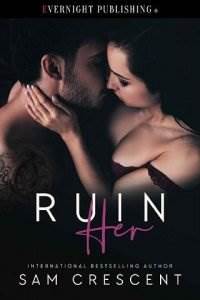 “There is nothing wrong with just having a drink and having some fun,” Ellie Taylor said to herself after she downed a shot. She rarely, if ever, went out on a Friday night, but after losing three jobs within one week, she deserved it. There was nothing wrong with her work ethic, nothing at all. Nope, all that was wrong was people were cutting back on cleaners, dog walkers, and house sitters. She’d done all three and had made a pretty good living, but now she had to look for work elsewhere.

At least she was still a waitress. Working from job to job had become her life.

Tapping the shot glass, she nodded at the bartender who immediately came and filled up her glass.

Her friends were already out on the dance floor, partying and getting rubbed up by some guys. That wasn’t her scene. She loved a good dance so long as it was far away from any prying eyes and in the middle of her small apartment.

“We didn’t bring you here to drown your sorrows,” Casey, her friend, said. She was a party animal but could also afford it. They had met a couple of years ago when Ellie had taken the job as a dog walker for her parents. Beautiful, blonde, and lovely, Casey loved to socialize and for anything to celebrate, she was always there, but only because she wanted to get her wealthy parents’ attention and often made headline news with some of her antics.

“I’m not drowning my sorrows. I’m loosening up.”

“Then loosen up by coming and dancing with me.” Casey didn’t give her a moment to refuse. Within seconds, she was pulled out of her chair and onto the dance floor.

Casey’s other friends were already at the stage of kissing the guys they were with. Ellie didn’t know them very well. They were kind of prissy around her. Even after three years, they still referred to her as the help. She’d heard them in the bathroom. Casey wasn’t like that though. Even though they were worlds apart, Casey wouldn’t see their friendship die, and Ellie loved her so much because of it.

“Seriously, you drive men crazy with all that hair.”

Casey giggled. “We need to get you a man. You know, someone who can look after you.”

Ellie groaned. “I don’t need a man to take care of me. I can do that all on my own.”

“Well, I think it’s time you found someone nice and loving, who will take care of you. Love you for you.”

“We’re not going to find true love in a bar, trust me.”

“You never know. I’m open to us finding it anywhere.”

She laughed as Casey wrapped her arms around her neck.

“I’m not here to come looking for a man anyway. I’m just here to try and find some peace and quiet.”

“I hate to break it to you, but you don’t find anything like that in a bar either. What you find are willing men and women who would do anything to fuck each other.”

“Look at you using the dirty words.”

“Honey, you haven’t even seen anything yet. Speaking of, a guy’s been watching you ever since you sat at the bar.”

This made her pause. “He has?”

She wanted to look around to see who this hottie was but she couldn’t do it. The guy would then know what she was doing. Nibbling on her lip, she looked at Casey. “A good hottie or a bad one?”

“Definitely a bad hottie. He’s going to be the kind that obliterates your pussy for any other man. He’s a bad boy, I can tell. Dangerous.”

She rolled her eyes. “Now I know you’re exaggerating.” She let Casey go as she saw another man who wanted in on the action. “Good luck.”

She knew how this worked, pulling away from her friend. Casey tried to play hard to get but then immediately fell for the guy when he came forward at the right moment.

Leaving her friend to her newfound beau, she walked back to the bar. Her spot hadn’t been taken.

“Hit me,” she said, looking at the bartender, and then groaned. “I don’t get out much.”

“I can tell.” He poured her some more alcohol. “Are you having a good time?”

“If you’re looking for action, you’ve come to the right place. Giavanni’s can find you anything.”

“Thanks. I’m not really looking for anything. I’m just wanting a bit of fun.”

“Maybe you should’ve gone elsewhere. Your friends look like they belong. You don’t.”

“I don’t mean because of your friends showing more skin or anything.” The bartender blushed. “What I mean is you look like a nice girl, and the people who come here aren’t. They know what they want and it’s not to sit at a bar, down shots, and look sad. It’s about finding someone.”