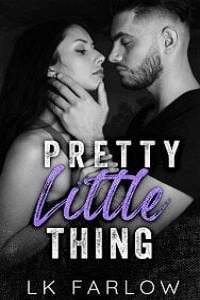 “ATF, get your wallets ready!” The DJ’s voice booms through the club, letting me know I better get my ass out there. “Because up next is your all-time favorite, Birdie!”

Even backstage, the whoops and hollers drown out all other sounds as men pull out fresh stacks of cash.

I check my mask and pasties one last time and then strut out onto the stage, swaying my hips in a way that’s much sexier than my accompanying music calls for, but still, the crowd eats it up.

My eyes scan the audience as I dance, alternating between working the pole and the floor.

I’m halfway through my routine when a guy I’ve never seen before bolts out of his seat. The intensity of his gaze is alarming. With his tanned skin, dark hair, and rippling muscles, he’s easily the most attractive man I’ve ever seen.

For a split second, I think he’s about to rush the stage, but then he turns and heads for the bar. I’m as disappointed as I am relieved, and I’m not sure what that says about me.

The rest of my routine goes off without a hitch, and I quickly gather the cash littering the stage, making a big show of fanning myself with the bills before blowing a kiss out to the crowd and then retreating back behind the relative safety of the curtain.

“Good set,” Walter says, keeping his eyes squarely focused on mine. Being that he’s built like a brick shithouse with the temperament of a grandpa—until messed with—and totally into dick, he’s easily the best part about working here. He watches out for his girls and only hires staff who share his ideals of look but don’t touch and fuck around and find out.

“Thanks, Walt. Want me on the floor?”

“Oh.” My heart thumps a little harder in my chest. Being one of the newer girls on the roster, Walter hasn’t put me on the list for private shows… until now. “Okay.”

“You’re ready, kid.” He steps aside, inclining his head toward the door down the hall. “He wanted a bed, but Ronnie talked him down to a couch. Still shelled out the big bucks for a private room, though.”

“Okay,” I say again, feeling more confident. Walt wouldn’t have put my name on the list if he didn’t think I was ready. He’s about people over profit and takes the comfort of his girls very seriously.

“Marcus will be outside of the door the entire time. If he tries anything, hit the panic button. Got it?”

Walter grins. “Atta girl. Now go shake that ass like you’re getting paid to do it.”

My confidence grows as I head toward the VIP room. I know from hearing the other girls talk that this is where the big bucks are made. And seeing as I’m already bringing home enough to cover my rent and childcare, anything I make back here will go straight into a savings account for my son.

I nod to Marcus as he opens the door, letting me into the room. “Hey there, hand…” My words trail off as I take in the hottie I noticed during my set, sprawled out on the couch like he doesn’t have a worry in the world.

Quickly, I regain my composure. “Hey there, handsome.”

He rakes his teeth over his lower lip as he slowly takes me in, dragging his eyes over every inch of my body.

My breathing accelerates under his appraisal. His gaze feels hot and heavy, almost like a physical caress against my exposed skin. And I can’t help but wonder if him looking at me feels this good, how much better would his actual touch be?

The man is gorgeous, like out of this world attractive, and he’s here… with me. He’s literally paying money to be here with me.

“You seem nervous.” It’s a statement, not a question.

My hottie’s voice is unlike anything I’ve ever heard before. Deep and rich, like syrup.

“Maybe a little,” I whisper, rubbing my fingertips over my thighs.

“Would it make you feel better if I told you this was my first time?” His lips tip up in what has to be the sexiest smirk I’ve ever seen.

“You’d be lying.” Right? Surely a man like him knows his way around a strip club.

“Cross my heart.” He draws an ‘X’ over his chest, and maybe it makes me an idiot, but for some reason, I believe him.

The thought of this being both of our first times in the VIP room sends a whole new rush of nerves—and maybe a little desire—rushing through me.