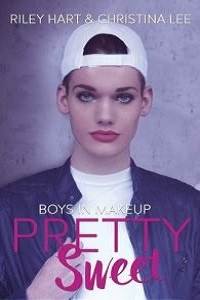 “So what’s the deal with the makeup, kid?”

I shrugged without taking my attention away from Harold’s wife, Elsie. It wasn’t the first time I’d been asked something like that, and I doubted it would be the last. By now I was used to it, even though I didn’t know why there had to be a deal with it at all. Couldn’t I simply like it?

“Harold!” Elsie shrieked, almost making me jab her in the eye with eyeliner. Obviously, hearing a question like that was new for her.

“It’s fine,” I replied. “Do you mean wearing it or putting it on your wife?”

It was something I’d stumbled upon—not makeup, but putting it on elderly people at Rose City Assisted Living. Portland had been nicknamed The Rose City since the 1800s, when a new pink rose was introduced there from France. They planted a bunch of bushes around the city, and it had become a thing. There was even a Portland Rose Festival and everything.

Volunteering at the facility just sort of happened. I’d spent my whole life being involved in a hundred different activities at a time. When I was young it had been piano and violin lessons. I’d tutored, and volunteered, and learned Spanish, and had been part of a chess team. That didn’t count the Future Business Leaders of America, our church activities, or everything else my mom and stepdad considered important to my success. It had never mattered what I wanted, only keeping me busy with nice, safe activities and being perfect. But this? This was different. I liked it here.

“Seth?” Elsie said, reminding me that Harold and I had been speaking.

I glanced at her husband. They were both in their seventies, but fit and active for their ages. They walked every day, played tennis, and I did Elsie’s makeup once a week for fun. I wouldn’t be surprised if Harold and Elsie lived longer than I did.

“I like to put makeup on people because it makes them feel good and because I think it’s pretty. It’s what I want to do for a career, and I guess I put it on myself for the same reasons.” I wasn’t as good at it as my best friend Jesse was. He was gorgeous and knew how to blend and mix color and create looks that didn’t come quite as naturally to me. I kept it simple when it came to myself, usually just eyeliner and lipstick, but I hoped to be more expressive on other people. That wasn’t acceptable in my family, of course. My mom and my stepdad were all about appearances and success. A career as a cosmetologist wasn’t their idea of being accomplished.

Sometimes I wondered how my dad had fit in with them at all. My dad and stepdad had both come from wealthy families. They’d been close their whole lives, best friends. Dad had been…different. More like me. Mom always said we had our heads in the clouds, that Dad would have run the business into the ground if it hadn’t been for her. Dad hadn’t cared about perfection or money, even though he’d always had it. He liked to laugh and have fun and was what Mom considered too tenderhearted. She said it about me as well, that we let people take advantage of us. She was right about me, at least in one way, but nope, wasn’t going there.

Mom needed to be in control of everything because she hadn’t had any of it growing up. Her parents had been eccentric—living off the land, moving often, and never had much. She’d been picked on her whole life for having holes in her clothes, or how she spoke, and because sometimes she’d lived in a bus, which was why she wanted perfection now, I guessed. I wished it had made her more understanding of who I was—someone a little different, who had sometimes been made fun of—but it didn’t.

When Mom was seventeen and in her last year of high school, she’d put her foot down about moving again, thinking her parents would stay for her and finally plant some roots. They hadn’t, so she’d had to fend for herself, relying on the kindness of virtual strangers to make it to graduation. I always suspected that her parents bailing on her had hardened something inside her, something that had become almost unreachable. It was probably the reason she didn’t let herself get close to people, because they might leave her or ultimately let her down.

My stepdad was like my mom, minus the whole troubled childhood. No one batted an eye when Mom married Dad’s best friend after his death, which…yeah, was obviously weird.

“You okay there, kid?” Harold said, and I realized he’d been talking to me. Maybe I did have my head in the clouds. “I said good for you. Let people be who they are, if you ask me. You wanna wear makeup? Wear makeup.”