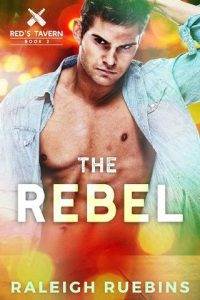 Glass crunched under my boots as I stepped behind the bar.

“Shit, I’m so sorry,” Sam said, staring down at the mess of martini glass shards.

I grabbed a broom and dustpan, holding them out toward him. “You don’t have to be sorry, you just have to start cleaning up,” I said.

I had to bite back a smile as I helped Sam gather the biggest chunks of glass. He was one of my best bartenders, but a minute ago he’d completely lost it when he saw a hot guy walk into the bar.

“When you see who just walked in, you’re going to shake in those cowboy boots, too,” Sam said. “Be glad I just dropped a few drinks instead of passing out on sight.”

The guy in question had walked in a minute ago, clearly just to use our bathroom and get out of the downpour outside. But Sam was in one of his usual freakouts, drooling over the glimpse he’d seen.

“Let me guess,” I said. “Another guy who you’re going to try to rope into being your future husband just because you saw him for two seconds and thought he was hot?”

The pink sparkly letters on Sam’s tank top glinted under the bar lights as he watched me and waited for a reaction. His shirt said Get Dirty, which was one of the tamer phrases I’d seen on Sam’s tanks. I’d never made my employees stick to a dress code, but sometimes Sam made me consider implementing one.

“You think anyone with more than ten Twitter followers is famous,” I said.

“I guess that makes me famous, because I have a hundred and sixteen,” he said, grinning.

I glanced over to one of our regulars, Henry, at the end of the bar, and noticed his water glass was empty. Tonight had been slow—the rain didn’t help, and Tuesday night turnouts were always weak to begin with. I tried not to think about all the money we were losing.

Just let every customer leave the bar happier than they came in.

It was my own modified version of the Campground Rule, and it was how I’d run the bar since the beginning.

My customers didn’t know I struggled to make ends meet. All they needed to know was that when they were here, they were a part of the Red’s family. They didn’t need to think about the world outside of these walls. And they’d never, ever be left with an empty glass.

I quickly went to refill Henry’s water. “Need another finger of whiskey?” I asked. He’d had his fair share already.

He shook his head. “Done with that for this evening,” he said, eyeing me and pausing for a moment. “Wouldn’t mind having a taste of you, though.”

He lifted an eyebrow, trying to be flirty.

I puffed out a small laugh. “Sorry, Henry. Not on the menu.”

“Aw, you’re no fun, cowboy,” he said. He was smiling, too, though, a glint in his eye. “I knew you wouldn’t, but I figured I’d ask for the hundredth time.”

I shrugged. “No such thing as a no-strings-attached hookup with a customer. Learned that a long time ago, and it’s been my policy ever since.”

Henry nodded, taking a long gulp of water before tossing cash on the bar and standing up. “You’re a stronger man than the rest of us. G’night, Red.”

I crossed back over toward Sam, who was pursing his lips at me and shaking his head.

“Haven’t broken it in ten years, and it’s not happening now,” I said simply. “I don’t care how hot a customer is, they ain’t coming to my rodeo.”

“Just gonna be another customer, to me,” I said.

“But I’ve watched this guy get fucked before,” Sam said, keeping his voice low. “At least a hundred times.”

He cocked his head to one side. “Really?”

I bent down to make sure no more pieces of glass were on the floor. There were cracks in the grout between the tiles, and I couldn’t help but notice a jagged line in one of the lower wooden cabinets where it had been hit with a sharp piece of glass.